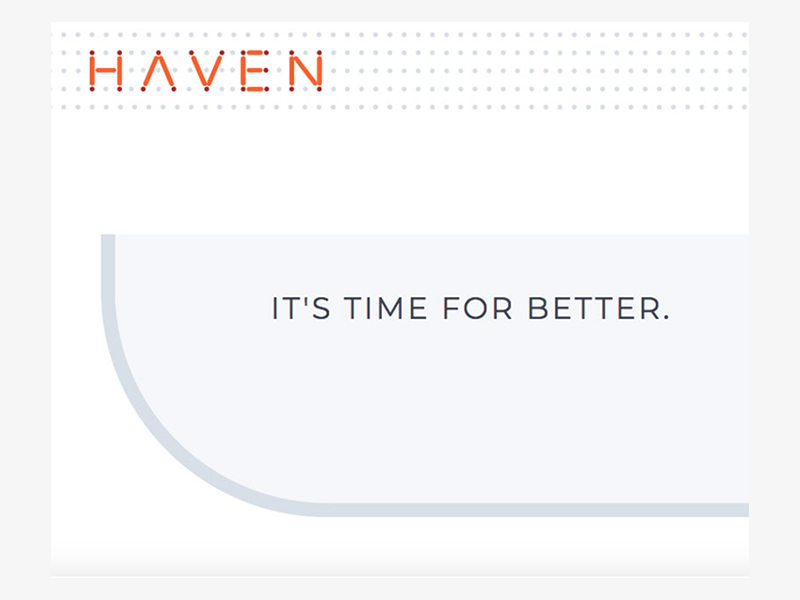 Last year, Amazon raised eyebrows when it announced a healthcare venture with Berkshire Hathaway and JPMorgan Chase. It was still in the planning stages at the time, but now the tech giant and its partners have stepped out of the shadows to present their project to the public.

The new venture that had been known by its acronym, ‘ABJ’ or ‘ABC’ (depending on how you referred to the different sides of the JP Morgan name), now has a shiny new brand name: “Haven”.

According to the newly minted website they’ve launched along with the revelation, the name “reflects [their] goal to be a partner to individuals and families and help them get the care they need, while also working with clinicians and others to make the overall system better for all.”

Haven’s mission is to transform healthcare to create better outcomes and overall experiences, as well as lower costs for you and your family. It proclaims “we want you to get the right care, every time so that you can live your best life possible”. This all sounds great and very exciting but there’s just one problem. As a naming consultant with 30 years’ experience, I’m scratching my head on the name choice. How the heck did ABJ (or ABC’s) lawyer declare the name ‘Haven’ – a real, dictionary word as a viable, ownable and TM-able name? I’ll get to that in a moment.

But first, let’s look at the three players behind this venture. We’re talking about some of the biggest, most powerful companies in the US. Amazon is a of course a consumer brand behemoth: $180B in revenue, 300M Amazon users, $3B in profit, 5% total share of retail in the US and an astonishing 49% of US retail e-commerce. Warren Buffet & Berkshire Hathaway need no introduction either – $242B in revenue while Jamie Dimon’s JP Morgan is perhaps the poor child with 2018 revenues of “only” $131B.

Back to the name, there are 580 trademarks in the US Patent and Trademark Office that include ‘Haven’.

For instance, Norwegian Cruise Lines have an exclusive area on board some of their ships called ‘The Haven’. According to Norwegian, ‘The Haven’ is the all-suite section of the ship, accessible by keycard-holders only. The Haven allows passengers to enjoy everything from a private bar and lounge to a custom restaurant, secluded sun deck and calm courtyard, without ever leaving the suite complex.

There are some 28 ‘Haven’ trademark registrations in Class 36 (insurance and financial category) and 24 in Class 44 (Medical services), 4 trademarks in Class 10 (Medical Supplies) and 4 trademarks in class 5 (Pharmaceuticals). In other words, most rational trademark attorneys would suggest that this name has clear conflicts but here’s the thing, naming and trademarks is not a level playing field. If you’re a big company with deep pockets you can use your weight to make these issues go away.

This co-existence agreement worked great until Apple started introducing music-related features and elements, which broke the agreement and kept the two sides in court for over a decade.

Finally, on 5 February 2007, Apple Inc. and Apple Corps announced a settlement of their trademark dispute under which Apple Inc. would own all of the trademarks related to “Apple” and will license certain of those trademarks back to Apple Corps for their continued use. The settlement ended the trademark lawsuit between the companies and although the deal was confidential various reports suggested that Apple Computer bought out Apple Corps’ trademark rights for around $500 million.

Commenting on the settlement, Steve Jobs, Apple’s CEO said, “We love the Beatles, and it has been painful being at odds with them over these trademarks. It feels great to resolve this in a positive manner, and in a way that should remove the potential of further disagreements in the future.”

Also in 2007, Cisco and Apple settled a trademark-infringement lawsuit over the use of the iPhone name. Cisco had previously launched an IP corporate phone system in 1998 with the same name. Under the co-existence agreement both companies will be allowed to use the “iPhone” name in exchange for “exploring interoperability” between Apple’s products and Cisco’s services and other unspecified terms.

And, when Google announced Alphabet has its new parent company name in 2015, there were well over 100 ‘Alphabet’ trademark registrations in the US alone. A BMW subsidiary called Alphabet declared that it would look at whether Google’s use of then name had infringed its rights. Almost 4 years after Google’s announcement, it seems that BMW has backed off filing an infringement claim but who knows whether other Alphabet trademark owners sought money and co-existence agreements with Google?

The big takeaway is that companies with deep pockets can challenge existing trademark owners in a way that most companies can’t. When we’re involved in naming companies, our clients know that they usually don’t have the time or resources to get locked in trademark disputes or deal with ‘cease and desist’ letters. Companies need a smooth path to trademark registration, and don’t want to face the wrath of another firm’s TM lawyers who could force a name change, which in turn costs time and money. With yesterday’s Haven healthcare announcement, you can be pretty sure other ‘haven’ trademark owners have been mobilized, so let the trademark infringement lawsuits commence. After all, the combined revenues of ABC/Haven are a cool half trillion dollars and chances are they won’t be concerned about throwing money at the problem.

Trademark ownership is and never will be absolute in the same was URLs are. Back in 2015 when Google made its big Alphabet announcement, BMW already owned the alphabet.com domain and wasn’t willing to sell. So Google picked a new, more unique idea: abc.xyz.